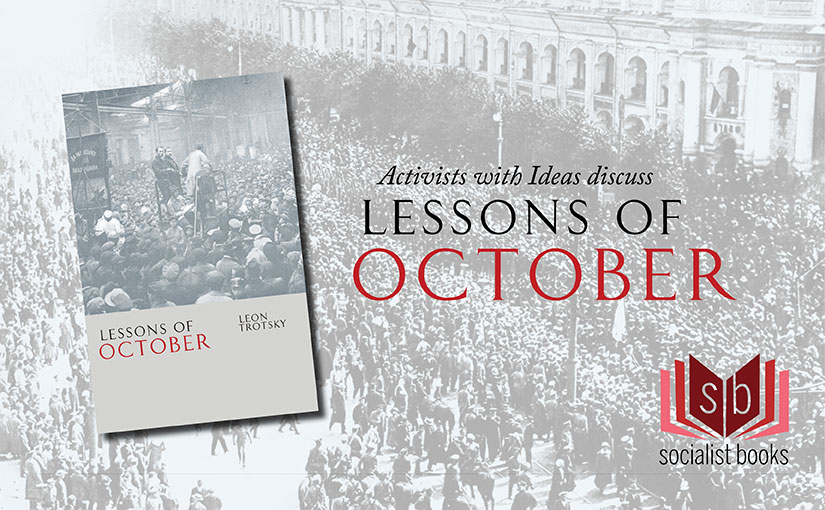 Judy Beishon, author of the introduction to our edition of Lessons of October, is speaking at an Activists with Ideas event at Goldsmiths University on March 18. Hosted by Socialist Students and London Socialist Party, this event is open to everyone interested in socialist and marxist ideas.You can see full details on the Facebook event page.

If you have not yet got a copy, you can get the Kindle edition here, order a paperback edition here, or pick it up together with our latest release Trotsky in 1917 and save £2.50 when buying both together!

For more information on the Activists with Ideas event, see below:

“Crisis, austerity and environmental devastation. That is the future capitalism offers for billions of working class, young and poor people across the globe. We live in a world where eight men own the same wealth as the 3.6 billion people in the poorest half of humanity, said Oxfam a year ago. In the year since then, the world’s richest 1% took 82% of all the wealth generated. And for the vast majority of people this system can’t meet people’s basic needs for housing, health care, education and even food and water.

“But we are fighting back and socialism is popular!

“Bernie Sanders becoming the most popular politician in the US, Jeremy Corbyn increasing the Labour Party’s vote in the UK, Syriza (before its betrayal) receiving 36% of a Greek general election vote, the emergence of Podemos across Spain, Jean-Luc Mélenchon receiving seven million votes in France, among others. Across the world we have seen movements develop around politicians standing against austerity..

“But to implement an anti-austerity programme we need ideas to challenge the rotten capitalist system.

“Activist With Ideas is a series of meetings hosted by London Socialist Party and Socialist Students. We will be discussing the Socialist and Marxist ideas needed to provide emerging movements against austerity and capitalism with a programme that can change society.

“Our first meeting is on Leon Trotsky’s Lessons of October

“2017 saw the centenary of the Russian revolution, an important event for those struggling against capitalism everywhere. 1917 is the only example, so far, of workers taking, and holding, power. This publication is ideal reading. It is the first overview of how the revolution was won, written by one of the leading participants.

“Come and hear from Socialist Party Executive Committee member Judy Beishon, author of a new introduction to a new edition of the book produced by Socialist Books.”