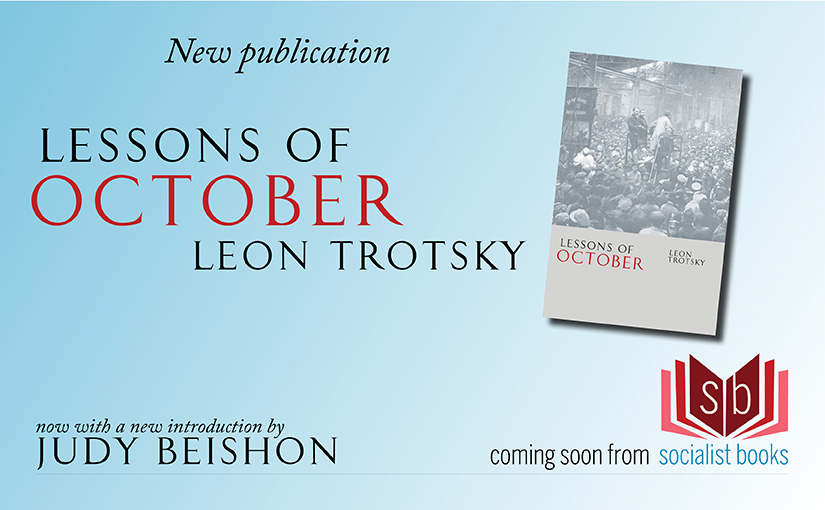 Socialist Books is proud to announce that our second publication is Lessons of October, by Leon Trotsky. This book opens with “We met with success in the October revolution, but the October revolution has met with little success in our press” – on the centenary of the Russian revolution, Socialist Books argues that the importance of the Russian revolution has only grown. You can order Lessons of October here, and receive your copy when it is returned from the printers on 26 September.

About Lessons of October

The Russian revolution of 1917 removed the brutal tsarist dictatorship and saw workers and peasants take charge of their destiny. The impact was felt around the world, inspiring a wave of revolutionary movements throughout Europe and beyond.

While the new workers’ state successfully defended itself from the invading armies, bent on snuffing out workers’ rule, the western revolutionary movements tragically failed and Russia was left isolated.

In Lessons of October, Leon Trotsky – together with Lenin a leader of the revolution – sought to draw out why the Russian revolution had succeeded, while other revolutionary moments had been missed. In particular, Trotsky looks at the role of the Bolshevik party and offers an insightful and frank examination of the difficulties and successes of developing a political programme offering a way forwards in the midst of the tumultuous and fast-moving events of 1917.

Writing to aid the fight for international socialism, Lessons of October provoked a series of attacks from the developing bureaucracy around Stalin, whose past mistakes Trotsky was exploring. Lessons of October is essential reading to understand the real history of the Bolsheviks and the October revolution, as well as the first-hand experience vital for the fight for socialism today.

Lessons of October will be available from September 26 – pre-order it today to get free shipping!